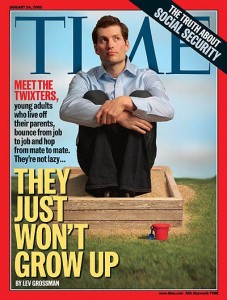 The delay in adulthood is a real phenomenon.

There are differences in today’s society, making the move from education to career a longer and more ambiguous path. More and more young people are slower to transition to adulthood. On average people are marrying later, entering the workforce later and struggling to become financially independent, often laden with a sense of uncertainty and anxiety about the future.

Why is this happening?

Contemporary society is more uncertain and disorganized than in past decades, making it more challenging to come of age in the 21st Century. There are more choices than ever before which can create indecision, and the rise in technological communication is diffusing attention spans and social interaction. 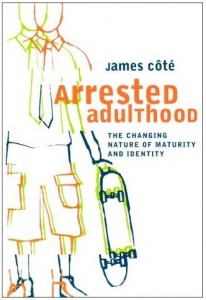 This makes the road to adulthood longer and more ambiguous for many young Americans. Researchers have even labeled this phenomenon “extended adolescence“ or “emerging adulthood“ to describe this trend occurring in developed nations.

Parents might wonder if their young adult children are on the right track, while those in the younger generation might feel “stuck” or experience a certain amount of anxiety or frustration about their future.

Today’s dizzying sea of digital distraction can hijack personal and professional development leaving young people with scattered attention spans and diffuse identities. Society is constructed such that it leaves many young people without fully-formed identities to guide them into careers, or to make educational choices, and other life-decisions with relationships and finances.